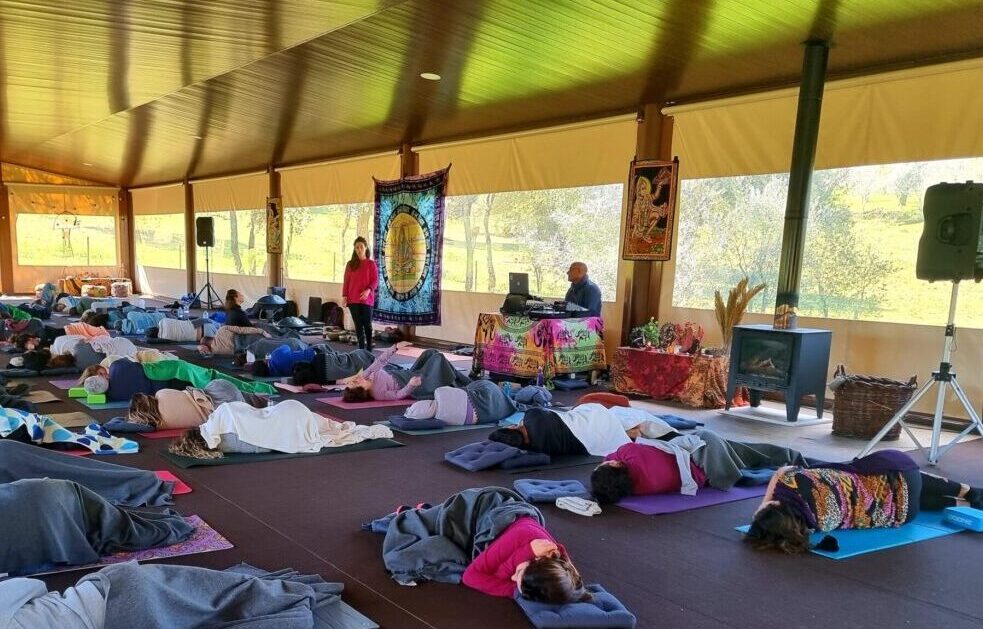 Sound Healing – what it can do for us:

Sound has been used in a sacred way by humanity for centuries.
The Vedas of the Hindu tradition wrote, “In the beginning it was Brahma who was the Word. And the Word is Brahma.”
Hopi Indians tell the story of the spider woman, who sang the song of creation to the inanimate beings of the earth, bringing them to life.
In the New Testament, Gospel according to St. John, we read:
In the beginning was the Word, and the Word was with God, and the Word was God.

All known great civilizations have used sound and music as a form of healing.
Hindu, Mayan, Egyptian, Greek or Tibetan civilizations had a vast knowledge on how to apply sounds for this purpose. Tibetan monks are the best living example of this to this day, with their guttural chanting, gongs, horns, and metal bowls.

Australian aborigines use the didgeridoo for healing, and many Native Americans used intonation and repetitive sounds with instruments created from nature such as the drum in sacred ceremonies.

Sound has been used by countless civilizations, both for healing and to unite in ceremony or celebration and have been with us for thousands of years.

Four facts that are important to contextualize the arrival of sound and music to complementary therapies in the West:

1) The resurgence of sound as a therapeutic modality;
2) The popularization of mantras in the West;
3) The emergence of digital music and the discovery of binaural sound;
4) The mass appearance of acoustic instruments such as crystal and metal bowls.

Fact: Musical aesthetics is a flexible thing.
Musicians are not required to use 440 Hz as base frequencies, and many orchestras around the world use different frequencies according to the music they are about to play.
It is generally accepted that Baroque music should be played at about A=415 Hz. The early classical and romantic eras at about 425 Hz, and later repertoire at 440 Hz and above.

All of the following merely reflects my personal opinion.
Based on practical facts, gained over 20 years of DJing (12 years of performances in analog and about 8 years in the digital format), studies and literature.

The concept of the healing power of solfeggio frequencies is very fashionable.

There are countless holistic therapists and sound healers who defend the 432 Hz theory. That this is the “healing frequency” because it magically matches the resonant frequency of human DNA. To the point of creating a conspiracy theory about the A=440 HZ, being. A mood control exercise instituted by the Nazis (with the 1939 standard call). The real irony of this belief in the “healing frequency” of 432 Hz, has confused New Age believers with yet another unproven claim about frequencies at 432 HZ. Because apparently the resonant frequency of the human DNA is at 528 Hz!

The whole notion of 432 Hz that was certainly used to provide rational number ratios.

As it was originally intended to do in the early 18th century. When this tuning reference system was first proposed, but it does not follow from this. That ancient civilizations used 432 Hz as a reference pitch!

Music in just intonation has the effect on the listener, of sounding simultaneously more calming. But at the same time, inspiring. – Just intonation was the real magic of music in ancient times. Not some arbitrary frequency measured at 432 Hz for that effect. The ancients, without any understanding of the physics of what sound was, could never have accurately measured it in the first place. It being virtually impossible to historically demonstrate the existence of solfeggio frequencies prior to the 19th-XXI centuries or their use by Pythagoras in antiquity or anyone else in the Middle Ages. Let alone historically legitimize healing practices based on them.

It is really surprising that so many.

But so many people who do sound therapy and alternative concerts are so ill-informed about their practices. From solfeggio frequencies, to the supposed best standard tuning of 432Hz or sharing news about the beneficial effects of music that rarely cites the sources. Making them dubious and simple pseudo-science, thus treating their work lightly or largely disrespecting their clients.
So, in this case, it is purely and simply an invented tradition, a fact sociologically studied at least since the publication of the book – The Invention of Tradition, by Eric Hobsbawn and Terence O. Ranger:
Cambridge University Press, 1983.

Ancient civilizations did not even fully understand the concept of what sound waves really were.

Let alone if they possessed an oscilloscope to measure the exact number of Hertz vibrations per second. Unless these were provided by extra-terrestrial beings. Which I’m sure most of the more “hard core” New Age 432 Hz obsessives also believe built the pyramids in Guatemala, Mexico and Egypt.

In the same way as the 432hz frequencies, a part of the “spiritualized” sound healing community began to “deify”. The solfeggio frequencies.
Fascinated by this vast and intriguing field. Many sound healers started to put their own frequencies. And today on Youtube you can find countless other miraculous frequencies.
Where each one of these frequencies – 396 Hz, 417 Hz, 528 Hz, 639 Hz, 741 Hz, 852 Hz – has a specific property that “cures” a certain evil. One of the best known and studied, 528 Hz, is connected to “DNA repair” and became known as the frequency of love.
And so we come to the trivialization of “sound healing”. A sacred field of human knowledge totally exposed to people who are either malicious or innocently ignorant.
The most numerous scientific works go in another line are connected to neuroscience and how music affects our brain. This is a rapidly growing field, but it focuses exclusively on music, and not on frequencies.

Much of this trivialization comes from ignorance

Some of it from people interested only in selling their products and services that are based on these magical frequencies, some of it just from ignorance.

Two speeches have become recurrent among defenders of the 432hz frequencies:

1) It is a frequency closer to nature;

Now whether the so-called solfeggio frequency is actually therapeutic, that’s another story.

Which probably needs a more sustained scientific proof by means of significant samples. Tuning for different tones has subtle effects on the timbre of acoustic instruments, but it makes no difference to electronically or digitally generated sounds.

My personal opinion is that music certainly has healing properties and can literally heal. Because of our truly archaic and pre-linguistic ability to express emotions through specific sounds, music is probably the only artistic means that communicates the beauty of aesthetic emotion, directly to our higher cognitive faculties. – In this way, music can transport us from our own inner sorrows and take us on a fantastic journey of inspiration and imagination. At the same time it infuses us, an appreciation of the timeless geometric symmetry of harmonious musical intervals, and music can in time restore our own inner harmony once again. 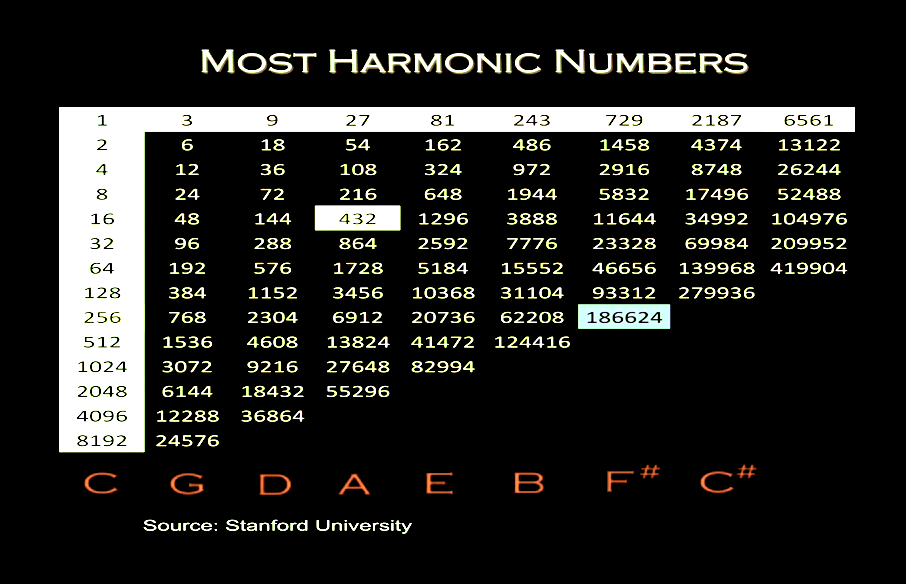 Sound is a blessed and very important tool in this moment of humanity.

It is sad for me to see so much banalization. Much of this vulgarization comes from ignorance.
In the Western conception, sound has always had something mysterious about it. Omnipresent and, at the same time, evanescent, sound does not surrender easily to a reasoning accustomed to things, places, and stable configurations.
Sound can be a potent medicine in the wrong hands and can produce great havoc.
I believe that the most important and essential thing is the power of our intention, of our thought. We can even say that all frequencies are divine. Sound is simply the messenger, the carrier that carries our intentions, that amplifies what we think and feel.
Whenever we “deify” a frequency, an instrument, a person or anything else. We are diverting our attention from the essential.
It is time to use sound and frequencies to discover more about ourselves or our divine nature. We don’t need magic frequencies for that.
What we do need is a loving, compassionate and happy intention with the sound we are producing or playing.

Unit of measurement of frequency.
One hertz (1 Hz) means that the wave oscillates one cycle per second. One kilohertz (kHz) = 1,000 Hz; one megahertz (MHz) = 1,000 kHz. (Radio).
The number of hertz (abbreviated Hz) is equal to the number of cycles per second.
The frequency of any phenomenon with regular periodic variations can be expressed in hertz. The term is most often used in connection with alternating electric currents, electromagnetic waves (light, radar, etc.), and of course in sound.

It is part of the International System of Units (SI),

which is based on the metric system.
The term hertz was proposed in the early 1920s by German scientists to honor the 19th century German physicist Heinrich Hertz. The unit was adopted in October 1933 by a committee of the International Electrotechnical Commission and is in widespread use today. Although it has not entirely replaced the term “cycles per second.”

Basically and simplistically it is the number of cycles per second that gives us the pitch of the sound and thus the frequency of the note we want to assign to it, which is arbitrary. It was defined by Heinrich Rudolf Hertz (1857-1894) in the second half of the 19th century.

The spectrum of sound frequencies that a human being is capable of hearing goes roughly from 20 Hz to 20,000 Hz (or 20 KHz). This is not to say that frequencies lower or higher than these do not exist.
Animals such as whales or even our dogs or cats can hear a much larger spectrum than ours.

The sounds of nature,

Basically and simplistically it is the number of cycles per second that gives us the pitch of the sound and thus the frequency of the note we want to assign to it, which is arbitrary.

When we talk about listening to and understanding music, we talk about musical “perception”. Perception is understood as the process by which the human being organizes and experiences information. Basically of sensory origin. Far from existing a consensus, music and its cognitive perception is a subject that has caused much controversy among representatives of various disciplines (Simon, 2000).

No comments to show.